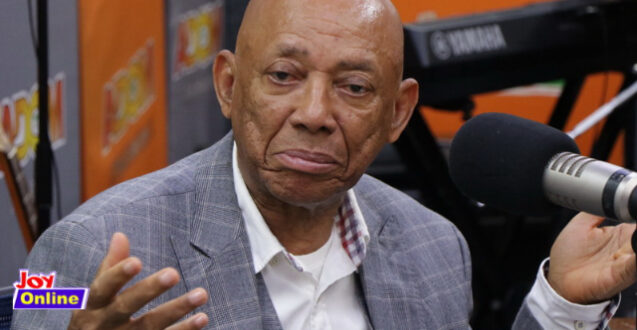 According to him, the body, which received the petition from the Civil Society Organization, Alliance for Social Equity and Public Accountability (ASEPA), exercised its discretion to cease investigation after finding out the same petition was sent to another body.

Speaking on Top Story, Emile Short explained that there is a position in Act 456 that frowns on a petitioner filing a similar case with two judicial bodies; adding that it amounts to multiple forum shopping.

“Section 13 of Act 456 provides that if in the cause of investigating a matter it comes to the notice of CHRAJ that a similar petition has been filed with another judicial body then it has the discretion to discontinue the investigation.  I think that the position taken by CHRAJ is the correct one,” he added.

His comment comes after ASEPA expressed displeasure at CHRAJ’s decision not to investigate the Chief Justice after he was cited in an alleged $5million bribe.

The Commission, JoyNews understands, realized that a petition had been sent to the President by ASEPA seeking the removal of the Chief Justice over the same matter.

But ASEPA’s Executive Director, Mensa Thompson, believes that CHRAJ should have called the CSOs so they decide which of the petition should be cancelled and which should go on.

However, Emile Short stated that CHRAJ can use its discretion in cases like these and not invite the petitioner to exercise an option as to which body it will continue the petition with.

“CHRAJ can refuse to investigate because it has the discretion to discontinue the investigation if there is a remedy which the petitioner can avail himself to,” he said.

The CJ has been in the news following allegations by private legal practitioner Akwasi Afrifa that he had asked for a $5 million bribe to deliver a favourable judgment in a case involving his client.

A Kumasi-based Lawyer, Akwasi Afrifa, Esq, made the allegation in a letter circulating on social media. The letter is a response to an invitation by the General Legal Council (GLC) for him to appear before it, in relation to a petition by his former client, Ogyeedom Obranu Kwesi Atta IV, for failing to pay an amount of $75,000 he (Akwasi Afrifa, Esq) owes the latter.

In the letter, Kwasi Afrifa Esq claimed that Ogyeedom Obranu Kwesi Atta IV, informed him that the Chief Justice had requested the said amount in order for him to receive a favourable judgement from the Supreme Court, in the matter of OGYEEDOM OBRANU KWESI ATTA IV V GHANA TELECOMMUNICATIONS COMPANY & LANDS COMMISSION.

Among other things, Ogyeedom Obranu Kwesi Atta IV, in his petition to the GLC, alleged that his lawyer had asked for an amount of 100,000 dollars from him to be used for what he called “ways and means” to secure a favourable court decision.

Mr. Atta told the General Legal Council that, he paid the amount but requested a refund on suspicion that the lawyer had not used the money for the said purpose.

But Kwasi Afrifa in his response dismissed the allegation and levelled new ones. He claimed it was rather his client, the chief, who alleged he had met with the Chief Justice who had demanded an amount of $5 million for a favourable judgment.

Ogyeedom Kwesi Atta has since denied this allegation.

He insists, he does not have a personal relationship with the Chief Justice and urged the public to disregard the allegations by Mr. Afrifa.

On his part, the Chief Justice had written to the Police CID asking that it investigates the matter. The Chief Justice also explained that when the matter came to his court, the chief accused him and another judge, Jones Doste of being biased, and demanded their recusal.

In spite of this, Civil Society Organization, Alliance for Social Equity and Public Accountability (ASEPA) petitioned the Commission on Human Rights and Administrative Justice (CHRAJ) to probe the matter.

The CSO also wrote a petition to President Akufo-Addo for the CJ’s removal from office, after alleging that the CJ is unfit to hold office, based on the allegation by Lawyer Kwasi Afrifa.

However, President Akufo-Addo has described as unwarranted and unmeritorious the petition seeking the removal of the Chief Justice (CJ), Kwasi Anin-Yeboah, from office.

The President in the response to ASEPA noted that the petition is not anchored on any allegation made directly or emanating from the petitioner but rather allegations made by Lawyer Akwasi Afrifa.

The President said this is a reproduction of a third or fourth hand hearsay as a basis seeking to trigger serious process of the removal of the CJ.

No evidence, the President argues, is attached to the petition beyond Mr Afrifa’s response and a request by the Judicial Secretary to the Ghana Police Service to investigate the allegations.