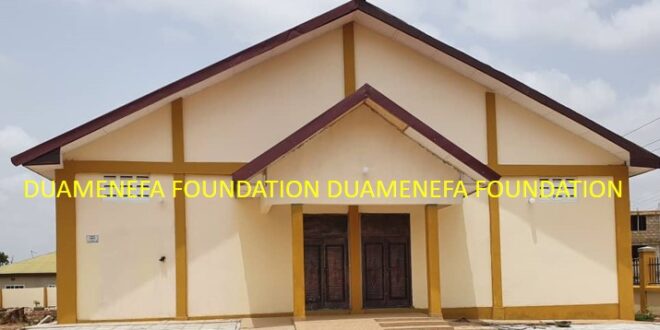 Apostle Cephas Dzraku, now deceased, was the former Volta Regional representative of the aforementioned NGO. The group is now under the Volta Regional Baseline Leadership of Bishop Cephas Korbla Nyamador with its Country Director named Apostle Daniel Joel Anku and other pastors supporting the group to fulfil their objectives.

According to the allegations contained in a petition to the Duamenefa Social Intervention program of Fafaa FM, signed by Rev. Apostle Eli Amevor and Rev. Sika Forgive, on behalf of the aggrieved pastors, the group promised the pastors and their congregants juicy packages such as; a) to construct chapels for its registered member churches, b) to pay all registered pastors undisclosed monthly salaries c) to offer scholarships to three children of registered pastors; these children will be offered free education from kindergarten to tertiary institutions d) the NGO will provide free feeding to church members e) the NGO shall build markets and mosques in the various districts and regions all over Ghana, among other promises.

According to the petition, the pastors and their congregants were therefore taxed to pay Ghc 250.00 each, which was later changed by the baseline leader Nyamador to Ghc 300.00 per head. This payment according to the aggrieved pastors was collected from over 300 churches and more than 7,000 church members paid the Ghc 20 feeding free fee.

Between 2019, to 2022, various churches, pastors and congregants were allegedly duped in various amounts of money ranging from Ghc 20 & 300 respectively.

According to Pastor Cephas Dzraku, when interviewed on Fafaa 100. 3 FM during the Duamenefa Social Intervention Program in the month of August 2019, he admitted that the source of funding for the organization was a huge amount of money stolen by our previous African head of states deposited in a bank in Switzerland, as contained in a video recording of meetings held in Holy Ghost Miracle Church International, Agbozume on the 4th day of June, 2019.

The aggrieved pastors claimed that they have waited for the fulfilment of the proposed juicy packages promised them since 2019 till date, but to no avail. Instead the group keeps tossing them with one excuse and the other, Pastor Boasi lamented bitterly in a voice recording trending on social media. He called on Cephas Korbla Nyamador to refund his money to him, that he is no longer interested in their alleged game of fraud.

Pastor Boasi, in an interview with Fafaa FM claimed his team alone has paid over Ghc 4,000.00 to this alleged group of fraudsters called an NGO. He is begging Nyamador to refund his money to him as soon as possible.

He also claimed that Bishop Nyamador is fraudulently generating ordination certificate for non-qualified pastors to be used for their fake registration under the Borderless Mission organization.

In another development, a Canadian-trained civil engineer and a contractor by the name Engineer Emil lamented during an interview on Fafaa FM that he was invited to join this United Mission Borderless organization by one Pastor Christopher Vigbedor, an action he deeply regretted.

The Canadian-trained engineer claimed Bishop Cephas Korbla Nyamador told him he is the best qualified candidate to be assigned the role of United Mission Borderless NGO project manager for the Volta Region. Thereafter, he was lured by Apostle Joel to loan the sum of Ghc 28,460.00 to the Borderless Mission in addition to various sums of money he spend on their activities totalling Ghc 36,000.00.

He further claimed that even though the frontline pastors of this organization signed credit advance agreement with the intention to refund his money by the 31st March, 2022, all efforts to retrieve his hard-earned money from this organization proves abortive.

Engineer Emil further alleged that Bishop Cephas Korbla Nyamador disclosed to him that Apostle Joel and Co have misappropriated the money they have collected from them. Apostle Nyamador was heard in the said tape telling the engineer that Apostle Joel has invested their money in a Gold business and he, Joel, has no hope of getting money from the United Mission, but he told him he would rather make efforts to pay the engineer his loan (secretly recorded) to save the situation.

The Canadian-trained engineer was highly disappointed and quickly reported Joel and Nyamador to the Criminal Investigation Department of the Ghana Police Service, Accra.

When Fafaa FM contacted Pastor Christopher Vigbedor to respond to the issues raised concerning him by Engineer Emil, Pastor Vigborlo admitted that it’s true he introduced the engineer, who use to be his good friend, to the Borderless Mission group but he was not aware he was made to loan such a huge amount of money to the group.

Pastor Vigbedor further states that he has personally written a letter to demand the refund of his personal registration fee from Bishop Nyamador, because he later realized that the group is not genuine. He, however, regretted introduction of the engineer to this group and pray for the recovery of his money.

A group of pastors from the Oti Region called PAHA lamented through one Pastor Emmanuel Atidzornu on the airwaves of Fafaa FM that their church group has been allegedly duped to the tune of Ghc 87,450.00. According to him, they were made to pay Ghc 250.00 and their church members also paid Ghc 20.00 for reasons disclosed above, but having waited for the past three years, they have realised they were duped by Apostle Joel and Nyamador.

He claimed that they made Joel sign an undertaking to refund their money by the 18th June 2019, but they failed to honor their bargain, instead their lives have been threatened by unknown calls from someone who claimed he is a lawful officer.

According to him, on one occasion they were arrested by the police when they were about to register more people for the organization in the Oti Region. The Police asked them to provide the registration certificates and the bank accounts of the organization, but Joel could not provide the documents to the police as at the time and that was when they realized that the group was faked.

He further alleged that at a point in time, a major quarrel broke between the front-line managers of this group. The quarrel was necessitated by allegations of misappropriation of the monies collected from the registration of pastors and church members in most parts of the country.

This quarrel resulted in arrest and detention of some of the front-line managers in parts of Oti Region and the greater Accra Region.

All attempts by Fafaa FM to have the key front-line managers such as the country director, Mr. Joel Daniel Anku and Mr. Cephas Korbla Nyamador, the Volta Regional Baseline Leader were abortive. While Nyamador promised the CEO of Fafaa FM, and the Executive President of the Duamenefa Foundation, Emmanuel Ketaman Evortepe that he will tell Joel to come with him to react to the allegations in the public domain, he failed to honor his words as a man of God.

Nyamador further made certain disclosures on record about the operations of the organization to the Executive President and CEO of the Duamenefa Foundation of Fafaa FM. Since then, he keeps shifting his post whenever he was called upon to respond to the issues.

Joel, on the other hand, since 2019, refused to respond to the aforementioned allegations, he rather accused Fafaa FM for failure to do due diligence prior to the broadcast of the story. He threatened to take legal action against Fafaa FM. He carried his threat through a letter of caution from an outfit called Sika Consult.

This did not stop the outfit from carrying out their legitimate duties in line with the whistle blowing act in the public interest. While waiting on Joel and Nyamador to come out for their right of response.

Watch out for further developments…….