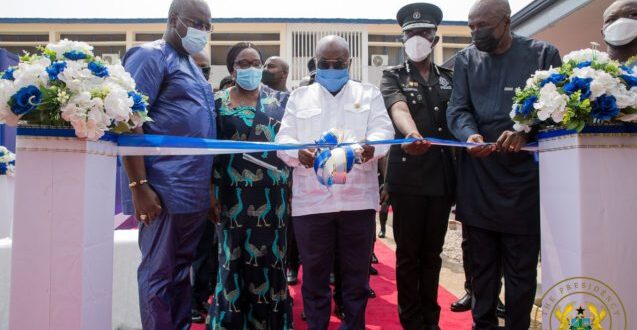 The fund is aimed at providing immediate financial assistance for the medical treatment of Police officers, who get injured in the line of duty.

According to President Akufo-Addo, “I have been assured that beneficiaries do not have to go through the usual bureaucracies and the associated delays which have, in the past, resulted, in some cases, in personnel losing their lives whilst awaiting treatment, and the deterioration of medical conditions of some others.”

Presenting the first three beneficiaries of the Fund, Chief Inspector Victor Anako, Inspector Theresa Ohene and Corporal Isaac Asuman Opoku, with amounts covering the cost of medical treatment in Ghana and abroad, the President was hopeful that “all Police officers who require medical treatment will receive the best of care, no matter the cost of treatment.”

On his part, the President made a modest contribution of GH¢100,000 to the Fund, a gesture which was met with spontaneous applause from the officers, men and women of the Police Service gathered at the venue.

In his remarks, prior to the commissioning of the New Out-Patient-Department (OPD) facility at the Police Hospital, the President commended the Police administration and the Management of the Police Hospital for constructing the new OPD, which will help decongest the existing facility, which, hitherto, was responsible for seeing to patients with emergency cases as well as to regular OPD patients.

“This new OPD, which cost a modest sum of GH¢180,000 will be dedicated to emergency cases only, in line with best practices. It will ensure a clear line of separation between emergency cases and routine OPD visits, thereby improving the quality-of-service delivery at the hospital,” he added.

He was particularly excited about the establishment of the Virtual Medical Centre, constructed at an equally modest amount of GH¢50,000. The Virtual Medical Centre, which is an end-to-end video hospital management system, will allow patients, no matter where they are located in the country, to undertake virtual consultation with healthcare professionals at the hospital.

Police personnel, irrespective of their location, can now access healthcare services from the Police Hospital anywhere in the country, at any time, with officers guaranteed a protected platform for seamless consultations with the doctor.

“Beginning with virtual OPD attendance, through diagnoses, laboratory referrals, prescription of drugs, and subsequent reviews, all of these medical processes can be done without one having to travel from his or her station.

“Indeed, if the medical situation of a patient demands a higher level of attention, the medical doctor would immediately make the necessary arrangements for the patient to be evacuated to the nearest medical facility for treatment,” the President added.

The President noted that, “this Virtual Medical Centre, the first of its kind in the public sector, is, indeed, worthy of emulation, and could not have come at a better time, as we continue to battle the scourge of COVID-19, which has, to a significant extent, limited person-to-person contact.”