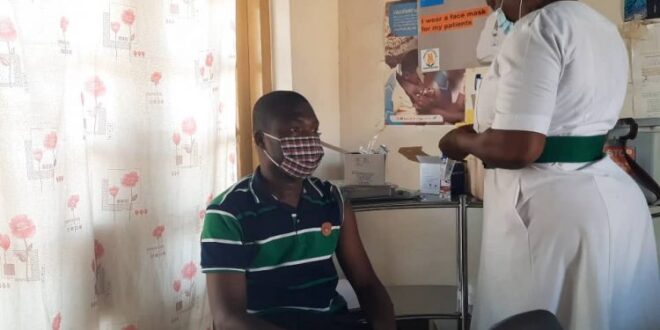 The Ashanti Regional Directorate of the Ghana Health Service (GHS) is impressed by the massive turnout for vaccination in two of the region’s districts, Kwadaso and Kumasi Metro, where the exercise commenced with the Johnson & Johnson vaccine.

The Deputy Regional Director, Dr. Michael Rockson Adeii in an interview on Eyewitness News said many residents were eager to receive the jab as they began queuing at the vaccination centres very early on Friday, August 13, 2021.

“The turnout has been impressive, even though not all four districts were able to start. People queued in the morning to get the vaccine,” he said.

The directorate is looking to vaccinate some 50,000 persons in this round of Johnson & Johnson inoculation in four districts; Kwadaso, Kumasi metro, Oforikrom and Asokwa.

The four districts were selected because they are hotspots of the virus in the region.

According to Dr. Adjei, the two districts that could not commence processes on Friday; Oforikrom and Asokwa, will do so by Sunday, citing challenges with training operational staff for the delayed commencement in those areas.

“Two districts started today, Kwadaso and Kumasi metro. The remaining two; Oforikrom and Asokwa will start hopefully tomorrow or Sunday. All the districts have received the vaccine, but it goes with training. We finished the training for the trainers only yesterday [Thursday] so they need to train the operational staff and that is what has delayed the process in the two districts,” he noted.

Dr. Adjei said there were some instances where persons who had taken the AstraZeneca vaccine attempted to get the Johnson & Johnson vaccine but “the system we have is able to sift them” and so such persons were counselled to go back and wait for their second AstraZeneca dose.

He expressed optimism that the cooperation of residents across the 20 vaccination centres will ensure a successful process.

He further advised residents to ensure strict adherence to the COVID-19 protocols to ensure that the infection rate is reduced.