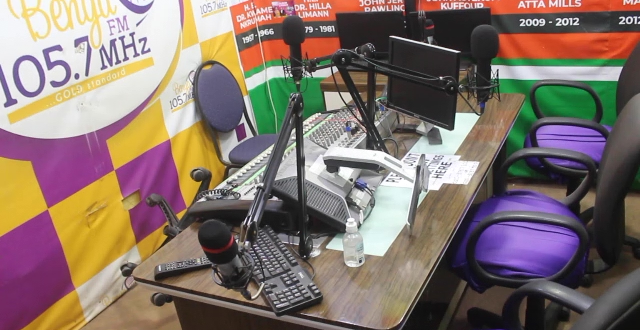 Three alleged attackers who stormed the studios of Elmina-based Benya FM during a live talk show on fishing and premix fuel distribution issues have been arranged before a Cape Coast Circuit Court in the Central Region.

The Police arrested the three suspects in Elmina on Wednesday, May 18, 2022.

The attackers stormed the studios during a live talk show on fishing and premix fuel distribution issues was and they assaulted the presenter for speaking against the improper distribution of premix fuel in the area.

They pleaded not guilty and were granted bail with two sureties each.

In an interview with the media, the Spokesperson for Benya FM, Mr. James Nunoo, said they are satisfied with the Court’s decision.

“We believe this will serve as a deterrent to others. Of late, there have been a lot of these cases where people take the law into their own hands and put fear and panic in the work we do.”

“We believe this is a classic case and the Court will listen to us and do justice, so it will serve as a deterrent to others,” Mr. Nunoo said.

The Broadcaster, who was assaulted, Mr. Eric Blessing Eshun, alleged that the MCE for the area was behind the attack.

The MCE, Mr. Ebo Appiah, has, however, denied the claims.

Meanwhile, the Ministry of Information, reacting to the incident indicated that a Deputy Information Minister, Madam Fatimatu Abubakar, has already spoken to the Manager of the station and the District Police Commander, both of whom are working together to investigate the incident and ensure that the suspects are brought to book.

The Ministry believes there is no justification for the attack, as there are more appropriate means of registering complaints where one feels they are being misrepresented by the media.

This incident comes not long after Ghana was ranked poorly in the latest world press freedom index by the campaign group, Reporters Without Borders.