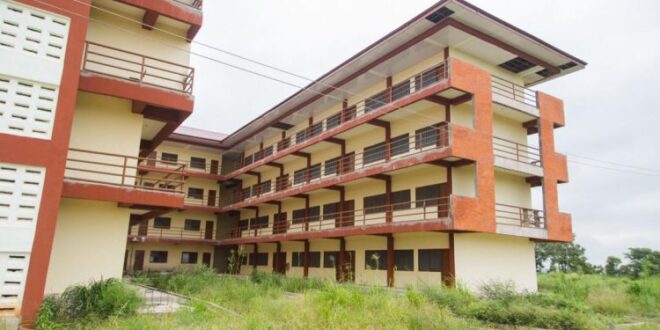 The Education Ministry has disclosed that some 27 contracts for the construction of E-block Senior High Schools in various parts of the country have been terminated.

According to the ministry, the contracts were terminated for various reasons, including the slow pace of work by contractors.

Speaking to Citi News, the Head of Communication at the Ministry of Education, Kwasi Kwarteng said the government has ensured continuity of some of the E-blocks and operationalized some contrary to claims that they have been abandoned since the New Patriotic Party assumed office.

“For 21 of them, we are very hopeful that they will be completed and operationalized soon. 16 of them are between 25% and 60% complete. 27 of them have their contracts terminated. If you look at them, some of them are at sub-structural levels. You award it to the contractor, and you don’t provide funding and the contractor can come to the site once and does not appear on site months later. The contracts have been terminated outrightly. For some of them, after 2 or 3 years, you see that the contract is still at 1% completion stage,” he said.

In 2012, the erstwhile Mahama administration announced its intention to build 200 Community Day Senior High Schools in the country to enhance access to Secondary Education.

At the time, contracts were awarded for the construction of 124 of the schools across the country, and the projects were known as the E-blocks.

Recently, the government has come under criticism, especially from the opposition National Democratic Congress (NDC) for not operationalizing some of the schools, although they had been completed.

One of the schools, the E-block in Aflao has generated controversy following a complaint from the chief in the area that it has been abandoned.

But Kwasi Kwarteng said that the Aflao E-block and others in the same category will hopefully be completed by February 2022.

“The building is completed. What is left is the refurbishment, chairs and all that. We are not sleeping. We are very hopeful that the Aflao one and others that are yet to be completed, by the next academic year, we should see it in the Computerized School Selection and placement system so that students will access it. That is somewhere in February [2022].”