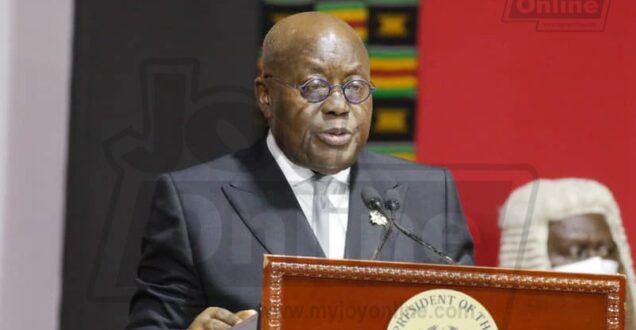 2022 State of the Nation Address postponed until further notice

The 2022 State of the Nation Address expected to be presented by President Akufo-Addo has been postponed.

This year’s address was scheduled for Thursday, March 3, 2022, but the Business Committee in Parliament said the President will not address the nation on the said date.

Speaking on the floor of the House on Friday, the Deputy Majority Leader, Alexander Afenyo-Markin, noted that a new date would be communicated soon.

According to him, this will be done “after we have engaged the Presidency.”

Article 67 of the Constitution mandates the President to present the nation’s address to Parliament at the beginning of each session of Parliament and before the dissolution of the House.

During the address, President Akufo-Addo is expected to underscore the achievements chalked so far, challenges faced, and outline developmental initiatives for the coming financial year.

On Tuesday, March 9, 2021, President Akufo-Addo delivered the 2021 State of the Nation Address for his second term.

In his presentation, the President charged MPs to discharge their duties towards the rapid transformation of the economy and the improvement of the living standards of the citizenry.

President Akufo-Addo also pledged that the Executive would work in tandem with the Legislative arm of government to fulfil this aim.

“As President of the Republic, I give my firm commitment to this end, and I assure Mr Speaker and the Legislature of the co-operation of the Executive in this endeavour.

Again, the President reaffirmed the commitment of his administration to improve the welfare of the Ghanaian teacher.

“I acknowledge that the teacher is at the centre of every reform in the field of education. Prioritising the welfare of teachers remains a key objective of government,” he stated.

He revealed that the NPP administration has been able to restore hope and confidence in the economy despite inheriting a shattered economy from the NDC administration and the adverse effect the Covid-19 pandemic had on the economy.