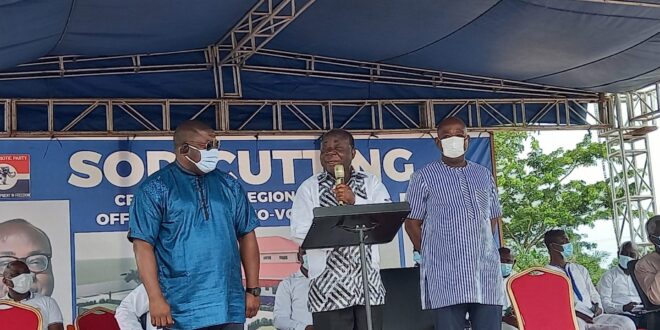 The National Chairman of the governing New Patriotic Party, Mr. Freddie Blay on Sunday, July 4, 2021 broke ground for the construction of an office complex  for the Volta Regional Secretariat of the party in Ho.

The project, estimated to cost a little over One million Ghana cedis, is an initiative of the Regional Chairman, Mr. Makafui Woanyah, and is scheduled for completion by end of year.

Speaking at the project site near Dave-Junction, off the Ho-Kpetoe road, Mr. Blay lauded the Regional Chairman and his team for to initiative to provide a permanent office for the NPP in region.

‘This effort of constructing regional headquarters is laudable, as it will provide an important base for the administration of party in the region,’ he stated, adding that, ‘the foundation we lay in Ho today is part of the NPP’s strategy to consolidate our presence in each region by creating and building a home for our members.’

‘The idea of a headquarters is of course more than just a home. It serves as an administrative hub that enables us to coordinate and build on our networks in the regions. A permanent headquarters provides us with an important base to strengthen the party’s organisational efforts in the regions,’ Mr. Blay further stated, and announced a GHc100,000 cash support from National Party, and a personal donation of Ghc 50,000 towards the project.

Mr. Fred Oware,  CEO of Bui Power Authority, who represented Vice President Bawumia, paid glowing tribute to the forebears of the NPP in the region for nurturing the  party in a  such a ‘tough terrain,’ and commended the current leadership sustaining their legacy.

He also announced a cash amount of GHc20,000 and 500 bags of cement as the Vice President’s initial support towards the project.

The Regional Chairman, Mr. Makafui Woanyah, on his part, said, having run the NPP in a rented premises since 1992, he deemed it opportune, to provide the party with a befitting permanent office complex to accommodate party officers and provide enough rooms to attended to the needs of its teeming supporters.

‘We cannot continue to build and live mansions as beneficiaries of the legacy of the elephant and yet deny the elephant a decent and a suitable abode. The party deserves better, than we have offered it and we are determined to change that,’ he stated, as he expressed appreciation to his predecessor, Hon. John-Peter Amewu for expanding and renovating current regional office.

According to him, the project, when completed will have offices for all regional officers, and an executive conference room, while second phase would commence next year.