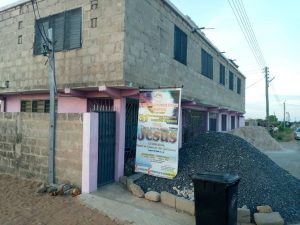 The moral decadence of the fibres of our society cannot be overemphasized most especially in recent cases of allegations of sexual escapades of the leadership of Elohim Prayer Ministries Woe in the Anlo district of the Volta Region of the Republic of Ghana. This time the assistant pastor and a prayer warrior who is a teacher by the name Mr. Prosper Ametordzi was caught in the room of one Madam Dora Shigbari, his co-tenant in flagrant demand for sex. According to Madam Shigbari, Mr. Ametordzi who is legally married and living in the same compound with his family sneaked into her room in the night to demand for sex. She was astonished and shouted – ” Ahhhhhhhhh!!! your church was in the news of recent and your leader prophet Atsu is being accused of sexually molesting members, and he also impregnated a married woman, so why are you attempting to commit the same immorality?” According to Dora, the assistant pastor who was bent to perform the act, answered her and claimed, “Leave my prophet issue…… “. At this point Mr. Ametordzie instructed a little girl of 11 years old, a daughter to Madam Shigbari to switch off the light, he pulled his trousers off and was flagged naked before the woman and daughter. Madam Shigbari fled with her daughter to take refuge with her friend, one Madam Valerie overnight. She left the pastor naked in her apartment. According to her, she quickly alerted a neighbour to inform the wife of Mr. Ametordzie. The wife of the assistant pastor, in her anger, dashed to the room of her neighbour, saw the husband lying naked with his boxer pants beside him. She pounced on him, pulled his manhood and a serious fight broke out between husband and wife in the apartment of Madam Shigbari; it was a direct replica of the “George Floyd scenario of the USA”; while the wife held onto the private part of the husband, the husband held to her neck, punching severe life-threatening blows. The wife overpowered the man at a point, held his neck squeezed in her armpit and the man was panting for breath. The fight saw the entire room of the co-tenant scattered in rubble. It took the intervention of some members of the Duamenefa Foundation resident in the environment to raise alarm and the fight was separated. The assistant Pastor who was naked during the entire process was filmed in the act. The Duamenefa Foundation quickly sent the video clip of the near death fight between husband and wife to the District Chief Executive of the Anloga District, Hon. Seth Yormewu who was equally alarmed and instructed the police commander to effect the arrest of the assistant pastor. It would be recalled three weeks ago, the head prophet of Jerusalem Prayer Ministry of Woe, one Atsu Robert Mensah Nyatuame was in the news for his nefarious sacrilegious activities of sexual molestation of members of his church, to the extent where he impregnated a married woman of five children and claimed he has a covenant with his God to do so. His own wife out of anger carried a kitchen knife to attack Madam Peace Nyonyo, the adulterous married woman, and this led to an open fight between the pastor, the wife and his concubine and blood was shed in the house of God with the prophet’s wife sustaining various degrees of injuries. (Ref: SACRILEGE AT JERUSALEM GATE MINISTRIES – WOE !!! – Duamenefa Foundation) The Duamenefa Foundation of Fafaa 100.3 Fm, through the Executive Council President, Mr. Emmanuel Ketaman Evortepe, duly reported the news and called on all relevant stakeholders such as the NCCE, the department of Social Welfare, the traditional rulers for intervention to the rescue other unsuspecting victims, but the process was truncated when the citizens, who were angered by the attitude of the prophet, thronged the palace of Togbi Adoblanui to demand that the prophet should be tried publicly in line with the customary practices of the people of the community where all other sacrilegious act of idol worshipers alike have been tried in the open court for community intervention. It took the swift response of the district commander DSP Agbanyo to whisked away the prophet. The prophet was asked by the chiefs to discontinue his church activities pending the determination of these customary and criminal allegations levelled against him, but prophet Robert defied the order of the chiefs and the district security council (DISEC) and alleged that the police commander in person of DSP Agbanyo instructed him to continue his church activities contrary to the caveat of article 12(2) of the 1992 constitution of the republic of Ghana. The question is in matters of human rights, where the public interest outweighs the individual interest and what the constitution prescribes! The Elohim Jerusalem Prayer Ministry is constructed like a brothel, whereby some families of the members of the church have been pointing accusing fingers at the prophet for camping married women, divorcees, single girls, fiancées of some men for days and months in the name of special prayer activities The war lord of Ewe land, Awadada of Anlo, Togbi Agbesi Awusu II, who is based in the USA, when contacted by the Duamenefa Foundation of Fafaa Fm, frowned at the dispositions of the so-called prophet and asked that the church should be thoroughly investigated and if found wanting, should be made to stop its nefarious activities in the community in defence of the public interest. The Duamenefa Foundation of Fafaa 100.3 Fm is a Social Intervention NGO with over 15,786 members scattered across the various communities with the mandate to promote peaceful coexistence Watch out for further development on this series …….. Source: www.duamenefafoundation.org
2021-05-15
admin