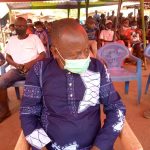 A Togolese fetish priest called Yao Agbanyo is on the run for allegedly manipulating the spirits of ritual money orchestration against a 14-year-old girl of Dzodze Fiagbedu in the Ketu North Municipality of the Volta Region, but resident with the family in a community of Kosamba in the Kedjebi District of the Oti Region.

According to the petition from Kennedy Ahiablame to the Duamenefa Foundation of Fafaa 100.3 FM, for investigation and intervention, he alleged that the Togolese claimed that the young girl has thoroughfare through his spiritual jurisdiction and violated the norms of his tradition practices and beliefs, hence he subjected the lady through a ritual bath to exorcise her from the attack of the gods.

According to him, ever since the spiritual bath, the mental state of the girl has been deteriorating through different stages of manifestations.

He continued to state that the Togolese spiritualist has been practicing the art of ritual money manipulations for some members of the Ahiablame, who are the children of Mr. Afayome Ahiablame of Dzodze, hence they believed that the young girl has been used for ritual money orchestrations.

The ritual money spiritualist has succeeded and rendered the young girl incapacitated at Kosamba. He later proceeded to visit the Ahiablame family in Dzodze for continuations of his ritual money activities. He was accommodated in Dzodze by Mr. Afayome Ahiablame, whose children were directly associated with the spiritualist in their ritual money venture.

Hon. Prince Agbedor, the assembly man of Dzodze Fiagbedu, on hearing the news of the arrival and the alleged continual manipulations of the people in his community in the name of ritual, quickly informed the police to arrest the spiritualist, but  his attempt was frustrated by a message he claimed he received from Togbi Atsu Dzesu III,  the municipal chairman of the traditional medical practitioners council (TMPC) through Mr. Kennedy, that the matter be withdrawn from the police for settlement at his court; an allegation Togbi Atsu Dzesu III denied when contacted by the investigation team of Fafaa 100.3 FM.

Meantime, Togbi Atsu Dzesu III, in his explanation to Fafaa FM, claimed that he was approached by Etsey Ahiablame to issue the TMPC licence for the Togolese, and he processed the application, but having realized the allegations levelled against the Togolese were of criminal dimensions, he withheld the licence. He showed the original licence in his custody to the Fafaa FM’s Investigation team. According to him, he tried to support the Ahiablame family to investigate the spiritual aspect of the allegations through the medium of traditional sorcery in his office and the results had revealed that the Togolese is directly responsible for the ailment of the young girl, hence he instructed him to exorcise the gods and free the young girl to enable her go back to school, but he could not complete the process due to a misunderstanding from other members of the Ahiablame family.

The plight of the young girl when possessed by the spirits, three strange rings from unknown sources appeared on her fingers. She behaves abnormally by shouting and exclaiming at the top of her voice that she sees mermaid spirits beckoning her to follow them to the river.

This abnormal attitude warranted the parents to seek for medical attention in nearby hospitals, but to no avail. The manifestations have continued for the past six months hence the family has no choice but to petition the Duamenefa Foundation of Fafaa 100.3 FM, Dzodze, for further investigation and intervention.

The Duamenefa Foundation of Fafaa 100.3 FM, through its Executive Council President, Emmanuel Ketaman Evortepe, promptly initiated investigations and the findings were as follows:

1. That Esi Ahiableame and her husband resident at Kosamba in Kedjebi, alleged that they are eye witnesses to the ritual money applications by the Togolese at Kosamba, and they took time to explain the processes and procedures engaged by the spiritualist

2. They further claimed they were present when the Togolese engaged the young girl in the ritual bath manipulations

3. Mr. Afayome Ahiablame confessed he housed the Togolese when he visited Dzodze, who has since fled and disappeared

4. Other deep findings on spiritual manipulations and orchestration to the detriment of the young girl are on record

The Duamenefa Foundation of Fafaa 100.3 FM, engages all relevant stakeholders such as the Directorate of the National Commission for Civic Education led by Mr. Prosper Apealetey and various traditional chiefs in line with the customary laws and practices to educate and proffer a solution to rescue the young girl, whose family are traditional deity practitioners.

Togbi Vodzi VI, on behalf of other chiefs and people of Fiagbedu, issued an invitation letter through Hon. Moses Azaglo, the immediate past municipal chairman of the NDC party who is also the secretary to Fiagbedu council of chiefs, for community intervention and arbitration meeting to save the life of the young girl.

The Ghana Police under the able Command of DSP Christian Dogbatsey were duly invited in line with the public order act and they honored the invitation accordingly. Other traditional rulers invited include: Togbi Dei III, Togbi Akutu III, Togbi Dali III, Togbi Esso IV, Togbi Akpeynu IV, all of various divisions of Dzodze, Awadada Togbi Esru IV, Mama Nuworza, both of Weta division among others.

The traditional arbitration took place at the forecourt of Fiagbedu – Duwornu, the Togolese spiritualist and other members of the Ahiablame family who were allegedly involved could not be present to answer questions from the Chiefs, hence the decision was taken by the chiefs to hand over Mr. Afayome Ahiablame, who is linked to the spiritualist through his children to the police.

The Assemblyman, Hon. Prince Agbedor complied with the decision of the chiefs, took Mr. Ahiablame to the police station and made him to sign an undertaking to produce the Togolese and his other children on Tuesday the 25th day of April, 2021, for continuity of the community arbitration and intervention to rescue the life of the 14-year-old girl.

Watch out for details.