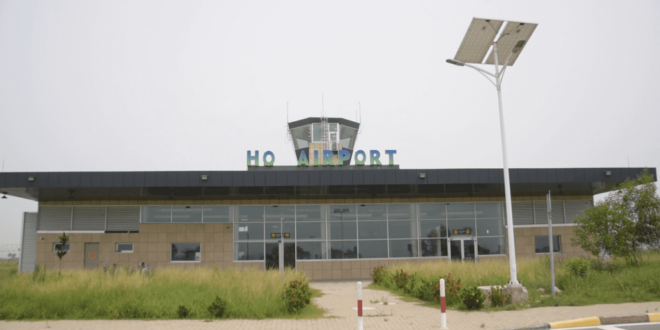 The much anticipated Ho Airport would on December 4, 2021, receive its first commercial flight, after it was completed in 2017, at an estimated cost of $25million.

Passion Air would be the first commercial airline to use the facility which was constructed under the Mahama-led administration, through the instrumentality of the late Dzifa Attivor, former Transport Minister, 2013 – 2015.

Speaking on the development, Honorary Consul of the Republic of Indonesia in Ghana, H.E. Paskal A.B. Rois, expressed delight at the news, adding that the operationalization of the airport would serve as a catalyst for the socio-economic development of the Volta Region.

He outlined the tourism, agriculture and industrial potentials of the region which he said the airport would serve a stimulant for the growth of these sectors.

He added the facility is well-positioned in West Africa, hence could become a transit point to other parts of the sub-region in the near future, if the right management and modalities are put in place.

H.E Rois disclosed that business moguls of Volta Region origin have begun scheming to put up million dollars projects in real estate at various sections of the Volta Region, due to the airport.

“This will also enable me to bring investors from Indonesia [to the region]”, he stressed.

He added that the full operationalisation of the Ho Airport would lead to a reduction of the youth unemployment rate in the part of the country, believing an abundance of jobs and opportunities would be created.

The Indonesian Consul opined that the airport coupled with the completion of Ghana’s eastern railway line would reduce travel time and ignite a decongestion of the national capital, Accra.

“When the airport and the rails are working, people can live in Ho and work in Accra. This will reduce traffic in Accra.”

He is optimistic traveling time and stress people go through, especially tourists to access the Volta Regional capital by road, would be reduced.

“When you arrive at the Kotoka International Airport, you don’t need to carry your luggage to the lorry station, sweating and the stress. You won’t go through those things again.”

“If you don’t have a place in Accra to stay, you don’t need to lodge in a hotel and leave the following day. You can just get your ticket connected right from the Airport there to Ho, your home.”

“Even if they put the ‘akple’ water on fire before you take off, you will meet it and have your ‘akple’ and ‘fetridetsi’ as dinner before your sleep”, he explained.

He concluded that the facility would also serve as a tourist attraction and motivation for the younger generation, “who may want to grow to become pilots, aerospace engineers, because of what they are exposed to.”