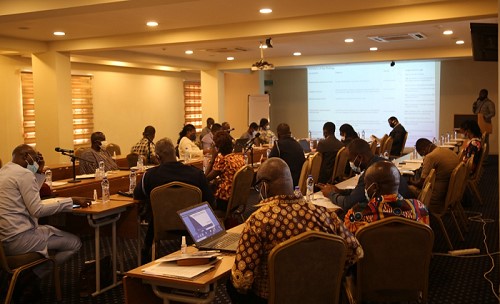 The report, titled: “Fear, Hunger and Violence” takes a detailed look at human rights and labour issues in the industrial fishing sector in Ghana.

According to the report, Chinese Captains on the fishing vessels will kick or beat the crew with anything they can find—whether stick, stone, basket or boot.

At a roundtable discussion in Accra on July 29, 2021, stakeholders in the industry expressed varied viewpoints about the report, which also suggested that Ghana may be failing to guarantee the basic human rights of workers onboard fishing vessels as set out in the International Covenant on Economic, Social and Cultural Rights, 1966 (ICESCR).

It adds that “On some days there would be no rest at all, as the net is hauled in every two to three hours. In contrast, the captain and senior crew members are said to work on rotation and will sleep in between shifts.”

Those that the study interviewed reported multiple potential violations of international human rights instruments and labour standards, as well as national laws.

In addition to human rights and labour issues, testimonies shared by the report of crew members and fisheries observers, confirm widespread and destructive illegal fishing practices in the trawl sector.

The report further highlighted that “There are concerns that the observer programme is substantially compromised by bribery, threats and corrupt practices which impede effective reporting and follow up on illegalities at sea.”

For him, states assume human rights obligation through the signature and ratification of international human rights instruments and, in so doing, have a responsibility to respect, protect and fulfil the rights set out therein.

He was of the view that the overexploitation of fish population is driving many workers into ever more precarious situations, saying that the depletion of fish stocks puts pressure on fishing operators to maintain catch rates and profitability.

He said the fishing industry has lagged behind other sectors in affording workers the necessary legal and other protections to ensure safe and healthy working conditions and prevent abuses of basic human rights.

He said majority of trawlers operating in Ghana—an estimated 90 per cent are beneficially owned by Chinese corporations, explaining that to circumvent a legal prohibition against foreign involvement in the trawl sector, operators net up opaque corporate structures to gain access to Ghana’s fisheries on local licences.

That, Mr Segbor added, Chinese nationals captained over 95 per cent of trawlers with active licences to fish in Ghanaian waters.

The Office Manager of the Ghana Industrial Trawlers Association (GITA), Mr Gilbert Sam, who was at the forum expressed unhappiness about the report, explaining that although the report sought to better the trawl sector, it failed to consult key stakeholders in the industry such as GITA before drawing its conclusion.

For him, although there may be some element of truth in some aspect of the report, the findings were not entirely accurate and did not reflect a true picture of the trawl sector.

The Coordinating Secretary of National Fisheries Association of Ghana (NAFAG), Mr Daniel Yaw Owusu, also expressed lack of involvement in the report by the Environmental Justice Foundation, saying that the deliberate attempt take the input of key stakeholders in the report smacks bad faith.