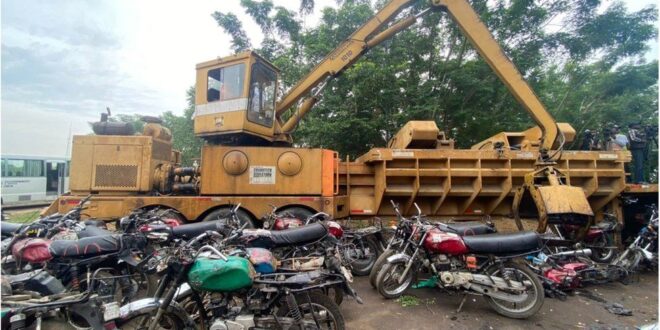 More than 2,000 confiscated motorcycle taxis have been crushed in Nigeria’s biggest city, Lagos, following a ban on the vehicles, known as okadas.

The move comes following the lynching of a man by suspected riders last month, which sparked outrage.

Sunday David, a 38-year-old sound engineer, was killed in the upmarket Lekki neighbourhood after a disagreement over fares.

His death sparked outrage and forced authorities to act.

His wife, Grace Bolu, was distraught and left questioning how she will support her two children.

“I’m just a civil servant. My husband does everything. How will I do it? How much is my salary to pay school fees, pay rent?” she told the BBC.

The ban has had a mixed reaction from local residents with some saying the riders drive dangerously, while others say okada riding provides vital work for young people.

An artisan residing in Ikeja, Wasiu Adekoya, bemoaned the highhandedness of the riders.

“They [the motorcyclists] kidnap people. What the government did is fine. We don’t want trouble in Lagos state. But let them roll out more buses to augment the shortfall.”

Another resident who identified himself simply as Pastor Abraham pleaded for leniency, saying okada riding provided vital income for many.

“There is poverty in the country. Total ban is not realistic,” he said. “This is what some people are using to feed themselves. Let the government be mindful.”

Since the ban has been put in place, parts of the city that are usually buzzing with okada riders have seemed unusually quiet.

Governor Babajide Sanwo-Olu, who announced the ban last month, said the prohibition would curb the okada menace – they are known for their speed and risk-taking as they weave through the city’s notorious traffic jams.

“Lives are being lost on a daily basis, preventable accidents are happening every day and the riders are not respecting any of our traffic laws,” he said.

Between 2016 and 2019 okadas were responsible for 10,000 accidents and over 600 deaths recorded in hospitals across Lagos state, according to government figures.

The current ban is the second time in two years Mr Sanwo-Olu’s government has prohibited the bikes.

Every governor of Lagos since 1999 has placed a partial or total ban on the operation of motorbikes.

Each time they did, it was only a matter of time before the motorbikes returned, largely because the police were unable to follow through on implementing the ban.

Enforcement is hard though considering that many riders do not bother to register their vehicles.

Some 42,000 commercial motorcycles number plates were registered in the first quarter of this year, says the federal road safety corps (FRSC), so it will not be easy to remove all of them from the city’s streets.

However on the first day of the ban, compliance was near total across the four areas the BBC monitored, although some riders are avoiding the highways and turning to minor roads.

The ban has been met with some stiff resistance from the bikers who threaten to protest.

One of them, Amada Amada, said he hopes the ban will fizzle out as in the past.

“We have no choice but to stay calm for now. It’s normal for them to show force but everything will soon go down,” he said.

There are also fears that some of the idle bikers could turn to crime, with nothing to do.

Not only do the bikes create jobs for a teeming unemployed population, demand for them is high due to their easy manoeuvrability, speed and ability to travel on poor roads.

The motorcycle transport union of Nigeria has reacted by reportedly filing a suit against the state, urging the court to compel the government to provide alternative jobs for its members and declare the ban illegal.

Lagos State police spokesman Benjamin Hundeyin told the BBC that this time the ban will be implemented for good.

“I can assure you that the commissioner of police has put measures in place to make [sure] the enforcement is sustained and we don’t have any relapse,” Mr Hundeyin said.

“Whoever boards the bikes will be arrested and prosecuted. There are mobile courts set up everywhere. The mobile courts cite what punishment to give to them,” he added.

But whether or not the ban will be effective remains to be seen.