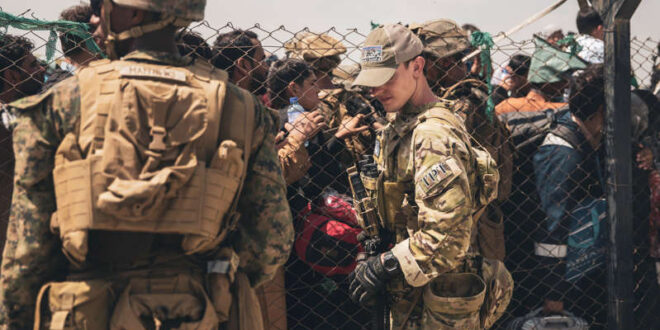 At least 13 people were killed, including children, and many Taliban guards were wounded in a blast outside Kabul airport, a Taliban official says.

The explosion at the airport, where thousands of people are trying to flee the country, is reported to have also wounded three US troops.

The US Pentagon said it was unclear whether there had been any casualties so far but some people claimed many people had been injured.

Fox News in the US reported there had been a second explosion.

Suspicion for any attack targeting the crowds would be likely to fall on the Islamic State group, not the Taliban, who have been deployed at the airport’s gates trying to control the mass of people.

The first blast appeared to be caused by a suicide bomb, another US official said, citing an early report and warning that the information could change.

The three US service members were injured in a “complex suicide bombing” near Abbey Gate, according to Fox News correspondent. Others reported an explosion at Baron’s hotel.

The US embassy in Kabul warned anyone at the Abbey Gate, East Gate, or North Gate should leave immediately.

Thousands of Afghans have been gathered at the airport for days trying to escape from the country since the Taliban takeover earlier this month. Western nations had warned of a possible attack.

US Pentagon spokesman John Kirby confirmed the first explosion, and the White House said Joe Biden had been briefed.

The New York Times said early reports indicated that the explosion was caused by at least one suicide bomber wearing an explosive vest.

Tory MP Nus Ghani said she was on the phone to somebody outside Kabul airport when the explosion happened.

The Wealden MP tweeted: “Explosion at Kabul airport. I was on the phone to an Afghan outside the airport when he heard the explosion.

“Praying that he gets away safely and we get his family safe passage out of this nightmare.”

Kabir Haqmal, a lecturer at Kabul University, tweeted that many people had been injured: “A very shocking news coming from #Kabul. #Taliban used tactics explosion is reported from inside the airport. Heavy casualties reported. Taliban are creating crisis in #Afghanistan. World knows the situation in the country, but do nothing. #AfghanistanBurning.”

Another Tory MP, Alicia Kearns, tweeted: “A bomb or attack with gun fire at northern gate of Baron’s hotel. Worried this will devastate evacuation – so many hurt. My heart is with all those injured and killed.”

Several countries urged people to avoid the airport earlier in the day, with one saying there was a threat of a suicide bombing. But just days — or even hours for some nations — before the evacuation effort ends, few appeared to heed the call.

The Taliban have pledged not to attack Western forces during the evacuation, but insist the foreign troops must be out by America’s self-imposed deadline of Tuesday.

Overnight, warnings emerged from Western capitals about a threat from Afghanistan’s Islamic State group affiliate, which likely has seen its ranks boosted by the Taliban’s freeing of prisoners during their blitz across the country.

British Armed Forces minister James Heappey told the BBC early on Thursday there was “very, very credible reporting of an imminent attack” at the airport, possibly within hours.

Belgian Prime Minister Alexander De Croo said his country had received information from the US and other countries about the “threat of suicide attacks on the mass of people”.The acting US ambassador to Kabul, Ross Wilson, said the security threat at the airport overnight was “clearly regarded as credible, as imminent, as compelling.”

The faction of Isis that is active in Afghanistan is called “Wilayah Khorasan” by Isis (Isis-K by others), meaning “Khorasan State”. Its “wilayat” are regional factions in different parts of the world. It covers Afghanistan, Pakistan and other parts of south Asia.

They have fought the Taliban now and again, as well as Afghan forces, and have launched significant terror attacks. They have not claimed any attacks on the Taliban since 14 August but previously did every few days.