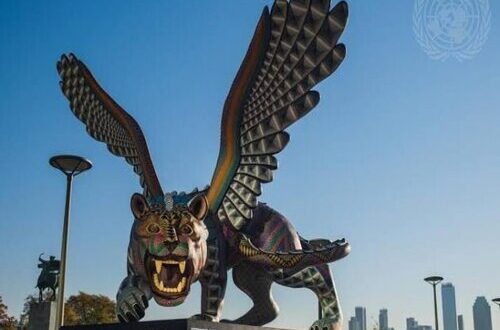 End Times: UN latest Sculpture Looks a Lot Like the Beast Referred to in Daniel 7 and Revelation 13

During the current times of taking down statues of historical figures due to the woke crowd, the United Nations has placed a giant statue in New York that resembles an end-times “beast” from the New Testament’s book of Revelation.

The U.N. recently tweeted a photo of the statue.

“A guardian for international peace and security sits on the Visitor’s Plaza outside #UN Headquarters. The guardian is a fusion of jaguar and eagle and donated by the Government of Oaxaca, Mexico.”

A guardian for international peace and security sits on the Visitor’s Plaza outside #UN Headquarters. The guardian is a fusion of jaguar and eagle and donated by the Government of Oaxaca, Mexico @MexOnu. It is created by artists Jacobo and Maria Angeles.
UN Photo/Manuel Elías pic.twitter.com/q8SSsQhz1L

Daniel chapter 7:2-4 describes the beast with the body of a lion and wings of an eagle:

Daniel spake and said, “I saw in my vision by night, and, behold, the four winds of the heaven strove upon the great sea. And four great beasts came up from the sea, diverse one from another.

The first was like a lion, and had eagle’s wings.”

The Apostle John described a beast with similar features in the New Testament passage in Revelation 13:2.

“And the beast which I saw was like unto a leopard, and his feet were as the feet of a bear, and his mouth as the mouth of a lion: and the dragon gave him his power, and his seat, and great authority.”

Another Bible verse that’s evoked by this U.N. statue to “peace and security” comes straight out of an End Times warning from 1 Thessalonians 5:2-3:

“For you yourselves know full well that the day of the Lord will come just like a thief in the night. While they are saying, ‘Peace and safety!’ then destruction will come upon them suddenly like labor pains upon a woman with child, and they will not escape.”

Writing for The Economic Collapse blog, commentator Michael Snyder noted the statue “looks like something out of a science fiction movie,” not resembling any known creature on this planet. You can see a video of the statue here

“Did they really think that they could put this up without anyone noticing?” Snyder asked.  “And just by coincidence, it has been painted in LGBT colors.”

“Wow you just can’t make this stuff up…The new UNITED NATIONS sculpture for ‘Peace and Safety’,” she wrote, also including a large photo of the statue.

Caudill also mentioned the verses above and included this warning to her followers.

“Was this the beast John saw in Revelation in his vision of the end times…given power by the dragon (serpent/satan) over all peoples, languages, & nations…the U.N.)?!! Copied from Angela Renee,” she wrote.