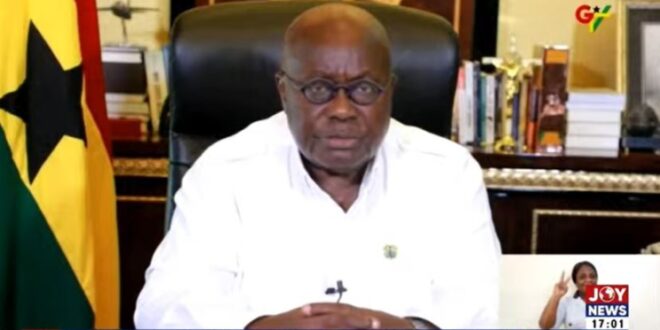 President Akufo-Addo has revealed that a technical committee has been set up by the Ministry of Employment and Labour Relations to review the Single Spine Pay Policy.

According to him, this review is expected to give the government answers on whether or not the policy is living up to expectations.

Speaking at the May Day ceremony on Sunday, May 1, he stated that “I am also happy to announce that following the National Labour Conference at Kwahu, the Ministry of Employment and Labour Relations and its tripartite partners have set up, as of Tuesday, 26th April, a technical committee to review the Single Spine Pay Policy (SSPP), and advise Government accordingly.”

This year’s May Day celebration was held under the theme, “Protecting Jobs and Incomes in the era of Covid-19 and Beyond.”

President Akufo-Addo stated that the government is expecting the report on the review in July, 2021.

This, he believes, “will help us put an end to most of the unrest we see on the labour front involving public sector workers.”

The Single Spine Pay Policy was introduced by the Government of Ghana and implemented in 2010 to regulate the payment of public service workers, especially those under Article 190 of the 1992 Constitution of Ghana

In a review by Bossman E. Asare of the University of Ghana and Dennis Mpere, some of these challenges included a high public expectation, dissatisfaction with the grading structure by some workers and inadequate financial and human resources facing the Fair Wages and Salaries Commission (FWSC).

Others are; inadequate education, conditions of service and allowances for workers.

President Akufo-Addo’s comment comes after some government workers over the past few months embarked on strike actions over conditions of service.

The recent strike action is by the Civil and Local Government Staff Association of Ghana (CLOGSAG).

They went on strike on Thursday, April 21 over the nonpayment of the neutrality allowance.

They argued that despite official reminders and follow-ups, payment of the Neutrality Allowance has not been effected as agreed.

Meanwhile, aside from the review of the Single Spine Pay Policy, President Akufo-Addo said, to protect the jobs of members of organised, his office and key stakeholders are fashioning out the right policies to protect jobs and income.

They include the rollout of employment benefits, and retraining of workers among others.