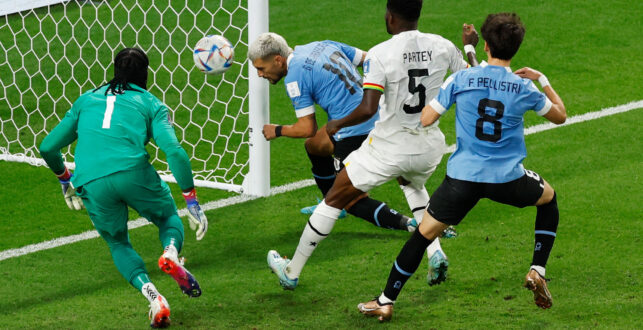 World Cup: Uruguay score quick-fire double against Ghana but miss out on the last 16

There is despair for Ghana’s Black Stars with Uruguay playing well to go 2-0 up even before half-time.

Uruguay doubled its lead over Ghana with Giorgian de Arrascaeta scoring again in the 32nd minute.

Giorgian de Arrascaeta scored the first goal of the match in the 26th minute, giving Uruguay a 1-0 lead over Ghana.

The first half could have gone very differently for Ghana as a moment of history repeated itself for the Black Stars.

Captain of the side Dede Ayew missed a penalty after the Uruguayan keeper was deemed to after brought down a Black Stars player in the box.

Up stood Dede who played the ball into the keeper’s hands.

The midfielder’s two goals came within a span of six minutes and put Uruguay in control of this match for now.

According to BBC Sport’s Shamoon Hafez inside the Al Janoub Stadium in Qatar, “Ghana look absolutely shell-shocked after those two Uruguay goals.”

He believes the missed penalty sapped all the confidence out of the Black Stars.

“Their fans are trying to keep spirits up but it’s a huge ask from here against this very experienced Uruguay side,” he said.

According to the reporter, the former Barca and Atletico forward Luiz Suarez is having a field day.

“Suarez is tormenting Ghana,” he said.

One supporter believes “Ghana spent far too much time talking about 2010. Not focused on the job in hand.”

Before the half-time whistle was blown, Daniel Amartey collided with Facundo Pellistri in the Ghana penalty area as he looks to shield the ball and allow Lawrence Ati-Zigi to gather.

Penalty? Pellistri thinks so but it just looks like a coming together and the referee waved play on.

Doing the break, Uruguayan captain Luiz Suarez was seen having words with the referee.

The nation’s fans will continue to nervously monitor the other Group H match between South Korea and Portugal. Even with a win, they’ll need help to advance.

South Korea isn’t playing like an underdog, as Kim Young-Gwon scored an equalizer in the 27th minute!

It’s an exciting match with South Korea and Portugal tied.

After Ricardo Horta’s first goal, the Koreans made more attempts at the Portuguese goal in an effort to equalize until Kim Young-gwon finally slipped the ball past goalkeeper Diogo Costa to score in the 27th minute.

South Korea will need to keep attacking and converting because the team needs a win to get through to the knockout stage. A loss or a draw will deny them a spot in the knockouts.

Second half is underway with Uruguay who look more likely to add to their tally before the break but Ghana are managing to stay compact enough for now.

The Black Stars certainly can’t let this get any worse before half-time, with two goals already required to progress as it stands.

Portugal are cruising into the last 16 at the break alongside Uruguay.

But it’s still all to play for. If Ghana come from 2-0 down to avoid defeat against Uruguay they could go through at their opponents’ expense.

If South Korea go ahead against Portugal they may also be able to qualify on goal difference.

Former Ivory Coast and Chelsea striker Didier Drogba says, “The penalty put Ghana back in 2010 and back in that situation.”

He added, “It’s difficult to come back after missing a penalty especially with it being captain Andre Ayew who missed it. It will be difficult for Ghana but they will have to come up with more solutions.”

Ghana are remaining patient in their build-up but Uruguay are back in numbers and continues to effectively stifle their advances.

Uruguay are unbeaten in their last four World Cup matches when leading at half-time, a run stretching back to 2014.

They’ll feel confident of seeing this out from here as Luis Suarez wins a free-kick for his side in the Ghana half.

In the other game, South Korea looked down and out and now they’re heading into the last 16.

A lovely finish by Hwang Hee-chan from inside the box after good work by Sone Hueng-min gives them a 2-1 lead over Portugal.

Luis Suarez, who gave two assists today has his hands on his head!

His Uruguay side needs to score another goal or they are out of the competition because South Korea has same goals than them.

Wheeew! That was an insane save! Ati-Zigi paid his dues there.

Edinson Cavani glances a header goalward but he is a good few yards offside. Still, what a leap that is from Lawrence Ati-Zigi to send it over his crossbar.

The Ghana keeper is down in pain now after suffering an awkward fall. Wow!

One goal for Uruguay, that’s all they need and currently heading out on goals scored.

Down goes Edinson Cavani inside the Ghana penalty area! No penalty!

The referee waves no penalty but surely VAR is looking at this?! He collides with Alidu Seidu and the Uruguay bench explodes into life.

As play goes on between Ghana-Uruguay, South Korea’s players are on the pitch in a huddle waiting for the full-time whistle in the other game.

From a chance for Ghana to another for Uruguay in seconds, Maxi Gomez sees his strike pushed away by the goalkeeper.

This is brilliant, ridiculous World Cup drama considering what we saw yesterday and what is happening today.

Incredible scenes as South Korea’s players watch mobile phone footage of Ghana-Uruguay. An announcement over the speakers that there are three minutes left in the other game.

Kamaldeen Sulemana gives it his all but it has been saved by Sergio Rochet!

Surely there’s one final twist here, there are no rules anymore. It’s attack after attack.

Edinson Cavani decides to pass to Maxi Gomez who fails to hit the target.

We’ve got about 90 seconds left.

There were unsavoury scenes at the full-time whistle as the Uruguay players and staff surrounded the referee.

Edinson Cavani and Jose Gimenez both received yellow cards after the final whistle.

It’s the first time Uruguay have failed to advance to the knockout stages of the World Cup in four editions.

DISCLAIMER: The Views, Comments, Opinions, Contributions and Statements made by Readers and Contributors on this platform do not necessarily represent the views or policy of Multimedia Group Limited.
Source: myjoyonline.com
2022-12-02
fafaafmonline_editor