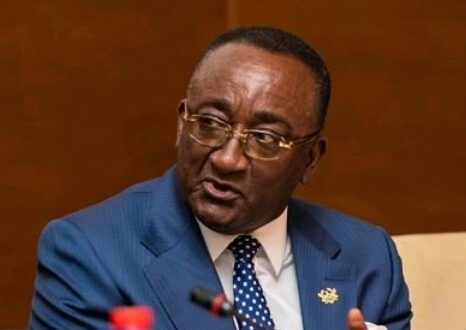 Planting for Food and Jobs has been 100% effective – Agric Minister

The Minister of Food and Agriculture, Dr Owusu Afriyie Akoto, has scored the government’s Planting for Food and Jobs policy a 100%.

According to him, the impact of the policy on Ghana’s agricultural sector has been astounding and he’s hopeful the policy will continue yielding phenomenal results in the coming years.

Speaking on JoyNews’ PM Express, the Minister stated that the impact of the policy on Ghanaian’s attitude toward farming and agriculture, in general, is immeasurable.

He stated that following the introduction of the policy, the country has seen more professionals from diverse fields as well as young people dive into agriculture and agric-processing.

Citing an example from his 8-day tour of Ghana’s forest regions he said, “On Saturday within a matter of two hours, I met two farmers who are medical doctors who have resigned and have entered into agriculture on a full-time basis.

“One of them doing coconut plantation with all kinds of products from coconuts, very interesting. And the other one was with his mother and family near Asamankese planting 5 acres of maize, cassava and so on.

“So within two hours I’ve met two medical doctors who had resigned and were permanently into agriculture, and that phenomenon is all over the country,” he said.

He added that “Last year when we went to Ejura, I had a forum for farmers and this lady stood up and was saying look, now it’s not only us, teachers, medical doctors, nurses, everybody is coming into the field to plant and it is the contribution of Planting for Food and Jobs in changing the psychology of the attitude of people towards farming and a lot of people are moving into agriculture.”

The Agric Minister further added that the Planting for Food and Job policy despite its challenges has enabled Ghana’s agriculture industry to be ahead of all the others in the ECOWAS region.

According to him, the agric sector’s growth at a rate of 8.4% in 2021 despite Covid-19 challenges shows how effective the policy has been.

“And it’s very obvious, you see, I’m the chairman of the ECOWAS Ministers for Food and Agriculture because our President is the Chairman of ECOWAS, and I’ve had two zoom meetings with my colleagues in the region and that’s where you come to see the impact of government policy, Akufo-Addo’s policy of Planting for Food and Jobs.

“We are far far better off than…I don’t even see which country, you know when they’re talking about their parameters, their constraints and the challenges they’re facing; of course, we are facing challenges, food prices are very high and people sit in Accra and say food prices are high because the government has failed in its agricultural policy, that’s a very simplistic view.”