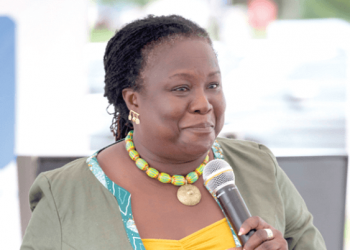 A former Dean of the School of Information and Communications Studies at the University of Ghana, Prof. Audrey Gadzekpo, says the failure of successive governments to pass the broadcasting bill has resulted in the unprofessional conduct of some media houses and the unprofessional display of certain media content.

According to her, the absence of the Comprehensive Broadcasting Bill and the lack of transparency in their location of frequencies has led to the capture of the media space by unseen political hands.

Speaking at her Inaugural Lecture on the theme: ‘Taking the Gown to the town: Reflections of a scholar-Activist on media in Ghana’s democratic Journey’, Audrey Gadzekpo said there is a need to pass the broadcasting bill which has been in parliament for years.

“The lack of any broadcasting legislation is a glaring lacuna in the country’s regulatory system which critics argue is mostly responsible for excesses in the broadcast space. In April 202, two teenagers in Kasoa were alleged to have been influenced by content on television to kill an 11-year-old boy for ritual purposes. The incident renewed calls for stronger regulation of broadcast content with the government responding by reactivating a draft broadcast that had been on the back burner for years and promising to immediately put the bill before Parliament. One year on, we are still waiting.”

“The failure of successive governments to enact a Broadcast Code, compounded by lack of transparency and how frequencies are located by the NCA has contributed to the political capture of Ghana media,” she added.

Her comments add up to many who have raised concerns about the absence of legislation to check media content.

The Professor of Communication Studies at the University of Ghana also turned to the Ghana Police Service and other state security agencies for failing to take action against the abuse of journalists.

Citing the attack on some journalists and the killing of an investigative journalist, Ahmed Suale, the academician said the lack of closure on these attacks continues to stain the records of the country’s respect for free speech.

“The Media Foundation for West Africa has documented several violations against the media. Examples include instances where police or soldiers have detained, assaulted, or threatened journalists while they were covering stories. The brutal assault on JoyNews’ Latif Iddrisu is a case in point. Equally, indicting is still the unresolved murder in 2019 of Ahmed Suale,” she noted.

She insisted that finding the perpetrators of the acts is necessary, considering the important role journalists play in Ghana’s development.

“Investigative reporters such as Anas Aremeyaw Anas, Kwetey Nartey, Manasseh Azure, and Francisca Enchil, have exposed corruption in institutions like the Ghana Procurement Authority, and Health Ministry amongst others.”

She further urged the National Media Commission (NMC) to do more and live up to its constitutional mandate.

“Largely perceived as a dog with a bark but no bite, the NMC on which I have served on two occasions has struggled to truly live up to its constitutional mandate of taking all appropriate measures to ensure the establishment and maintenance of the highest journalistic standards in the mass media.”