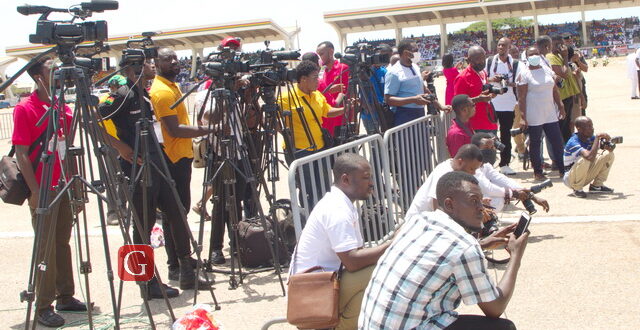 The Ghana Journalists Association (GJA) says it did not expect Ghana’s “precipitous” decline on the World Press Freedom index even in the existence of a “confluence of anti-media” factors.

At an event to commemorate World Press Freedom Day in Accra Wednesday (May 4, 2022), the outgoing President of the GJA, Roland Affail Monney speaking on behalf of the GJA noted that the ranking does not sentence Ghana to an irreversible situation, and called for the passage of the Broadcasting Bill to address challenges pertaining to the ownership of media.

He described Ghana’s latest ranking on the World Press Freedom Index as “depressing enough to effect dramatic mood swings from one of celebration to that of lamentation”.

“Indeed, a drop in ranking had been anticipated due to a confluence of anti-media factors. But never did we expect the drop to be so precipitous- 3rd in Africa to 10th, and 30th in the world to 60th, a 100 per cent decline,” Mr Monney said.

He said the GJA was also losing hope in the Police with regard to the resolution of unresolved cases of brutalities against journalists.

“Three years on the spin, the assassination of Ahmed Suale of Tiger Eye fame in the most heinous of circumstances has been a stain of Ghana’s reputation as a land of freedom and justice, a citadel of media freedom and a beacon of democratic accomplishment in Africa. Assurance upon assurance of arresting the perpetrators have remained a hollow rhetoric.

“Soon after his appointment last year, we received with hope the announcement by the IGP Dr George Akuffo Dampare that a special unit had been established by the police to handle all such unresolved cases of brutalities against journalists. That hope is wobbling”.

He also called for the passage of the Broadcasting Bill which he said would address lingering challenges regarding media ownership in Ghana.

Mr Monney further urged journalists to treat their “survival issues with utmost importance” as the GJA strives to obtain a bargaining certificate after unionization.

“We note with regrets that the Broadcasting Bill designed to address the lingering challenges on the airwaves has been incubating for far too long,” Mr Monney said.

“While we urgently demand the birth of the proposed law, either by natural or Caesarian means, we need to orchestrate a national conversation to take a hard look at the ownership structure of the media.

“Ownership confers control on media owners, some whom go to the extent of dictating content to the professionals they employ. We dare say that this issue poses the greatest threat to media freedom in modern memory”.