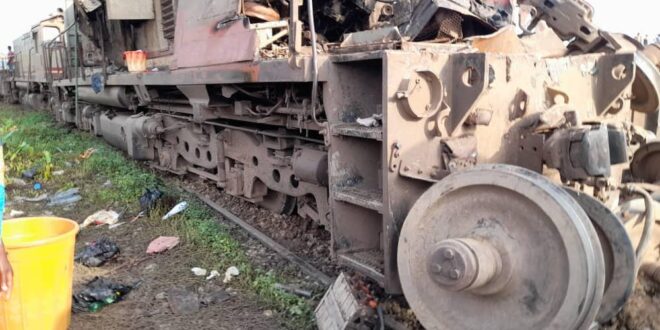 Four people have been confirmed dead in Saturday’s head-on haulage train collision at Wassa Manso in the Western Region.

Six other persons were seriously injured and were in critical condition.

The two trains were moving from opposite directions on the Tarkwa-Kojokrom route.

A preliminary investigation indicated that, the locomotive-engine driver from Tarkwa toward Takoradi failed to stop as instructed and attributed it to break-failure while the driver who was in charge of the locomotive from Kojokrom failed to heed to instruction to switch to another lane.

Some passengers who reportedly illegally hopped on board the haulage train without permission were trapped under the metal wagons meant to carry bauxite or manganese.

Some of the eyewitnesses told Graphic Online that they were able to pull one of the passengers out of the wreckage but he was unconscious.

The Western Regional Minister, Mr Kwabena Okyere Darko Mensah described the situation as unfortunate and called for full investigation into the incident saying, “it is avoidable and must be investigated.”

The Minister of Railways Development, Mr John Peter Amewu described the incident as sheer negligence, saying, “because of negligence the unfortunate has happened and we must guard against its recurrence.”

“Not too long ago we lost one of our managers in a similar incident in Accra – the truth is the industry is not already on the right footing and for this to happen again I must say it is unfortunate.”

“I must say from what I have been told, this is negligence – if one of the drivers who was supposed to stop and allow the other one to pass and he just refused to do so and attributing it to break failure which I don’t think it is right and these are things that we cannot accept,” he said.