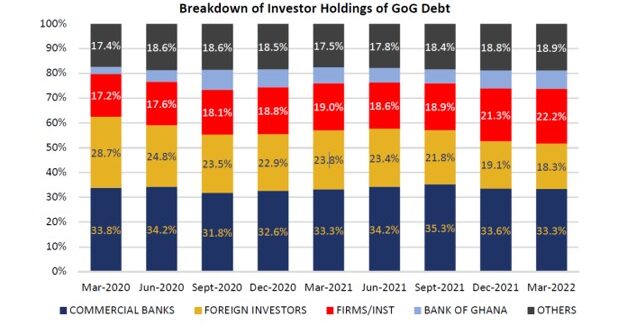 Foreign investors’ holdings of cedi bonds down for 5 straight months

For a straight five-month period, foreign investors’ holdings of cedi denominated bonds continued a decline: reaching GH¢28.65billion at the end of 2022 first-quarter since it peaked in August 2021 at GH¢34.04billion, as market volatility persisted.

During the period, investor sentiments led to a sell-off largely driven by various downgrades by the rating agencies and highly anticipated higher U.S. Treasuries yields, as the Federal Reserve hiked the policy rate to control surging inflation and expectations.

A fast depreciation of the cedi cannot also be left out of the factors, as it registered its sharpest quarterly decline in 7 years – plummeting by 15.6 percent against the American greenback.

Accordingly, data from the Central Securities Depository (CSD) indicate that offshore holdings declined to GH¢28.65billion in March 2022 – down by 0.27 percent quarter on quarter (q/q) from December 2021 and reflecting 18.32 percent of the total outstanding government of Ghana (GoG) holdings at the end of March 2022.

At the last Monetary Policy Committee (MPC) press briefing, Governor of the Bank of Ghana (BoG), Dr. Ernest Addison, indicated that the policy hike by 250 basis points to 17 percent is intended to revive investor interest in local domestic assets.

“The issue of ensuring that there is investor interest in our domestic assets is one of the reasons for the policy rate adjustment,” the Governor said, according to the transcript from the MPC press briefing.

Closing the first quarter of 2022, total outstanding fixed income securities on the Ghana Fixed Income Market (GFIM) amounted to GH¢186.93billion, representing a 2.88 percent q/q growth from the fourth quarter of 2021. This, according to the GFIM report, was largely driven by a 3.8 percent increase in GoG’s outstanding volumes, while BoG, Cocoa Marketing Board (CMB), Daakye Trust Plc (DTP), ESLA and corporates distributions remained same.

Reprofiling of debts to medium-term tenors

Apakan Securities Limited, in its first-quarter perusal of the market, indicated that presently the market preference is geared toward medium-term securities.

Accordingly, government’s debt profile has shifted toward the medium-term tenors – thus two years to seven years, as issuances have been tilted toward those tenors to suit the market interest and match investor preference so as to attract sufficient demand.

“Should investor confidence remain dampened amid revenue underperformance through the year and elevated inflation prompting a hawkish monetary policy stance by the central bank, movements in local currency (LCY) bond yields may remain tilted to the upside as market players reprise their assets to reflect the inherent risks in the economy. Consequently, government’s cost of financing could remain on the upside through the year,” Apakan said.