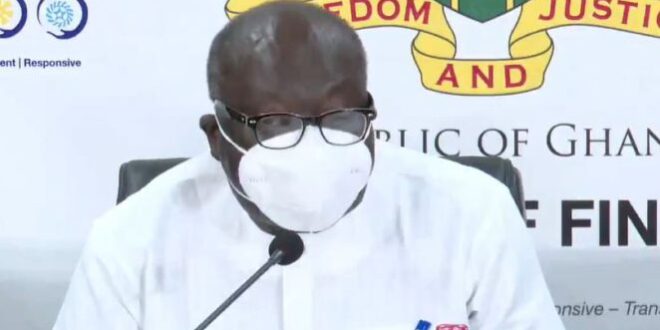 E-levy may be implemented in May – Ofori-Atta hints

The Finance Minister, Ken Ofori-Atta has hinted that the implementation of the Electronic Transaction Levy may commence in May, 2022.

According to him, the Ghana Revenue Authority (GRA) will have all the systems in place for the operationalization of the levy by then.

“I think the nation is settled, there is a certain spirit of calmness…. we had a key meeting with the Controller General and the GRA and they have indicated to us that right at the beginning of May, they should be able to get the systems altogether,” he said.

This revelation follows the passing of the e-levy Bill by Parliament on Tuesday.

The Bill was passed after deliberations at the Consideration Stage was concluded by a Majority-sided House on Tuesday, March 29, 2022.

The Bill, which was considered under a certificate of urgency, proposed a reduced rate of 1.5% from the initial 1.75% amid a Minority walkout. President Akufo-Addo is expected to assent to the Bill for it to become law.

Reacting to this, Mr. Ofori-Atta stated that “I think yesterday, we registered the moment in our history when things came together and we shall move forward and conquer.”

Touching on the suit by the Minority Group over the approval of the Bill, the Finance Minister said; “That is democracy; when someone has a problem, they go to court to resolve it, and then they move on.”

He added that he doesn’t see anything dramatic about the NDC going to court to have their issues addressed.

“We believe there was a quorum in the House, your walking out does not mean that there was no quorum. You could have gone to lunch and then come back, who knows? So we are really pleased that things went well,” he noted.

However, the Minority Caucus contend that Parliament did not have the required number of at least half of its members present, when the controversial tax policy was approved.

They, therefore sought the following reliefs in their suit against the Attorney-General;

b. A declaration that on a true and proper interpretation of articles 2(1)(b) and 104(1) of the 1992 Constitution of Ghana, there was no quorum to enable the 137 Members of Parliament of the Majority Caucus present in Parliament on 29th March, 2022 to pass the Electronic Transactions Levy (‘’E-Levy’’).

d. An order of the Honourable Court setting aside the passing of the Electronic Transactions Levy (‘’E-Levy’’) by the 137 Members of Parliament of the Majority Caucus present in Parliament on the 29th March, 2022 as a nullity.

e. Any other order(s) the Honourable Court may deem fit.”

Delivering this year’s State of the Nation Address (SONA22) in Parliament on Wednesday, President Akufo-Addo said although proceedings in the House have been protracted and acrimonious in nature, “I am happy that the House has, finally, found it possible to pass the e-levy.”