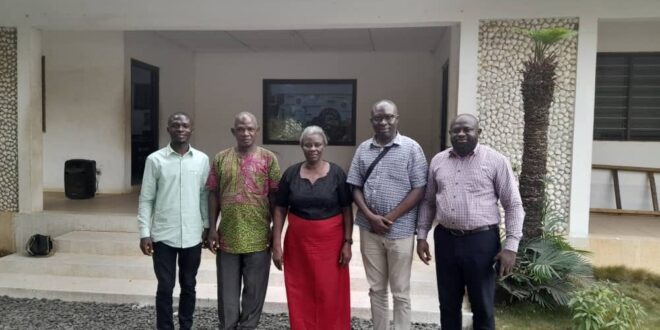 The Ghana Journalists Association (GJA) has described the decision by the Ada Traditional Council to ban Radio Ada from providing coverage of the Asafotufiami Festival as an affront to press freedom.

It pointed out that the council’s decision undermined Article 21(1)(a) and (f) of the 1992 Constitution of the Republic of Ghana and Article 19 of the Universal Declaration on Human Rights.

“With all due respect, the Ada Traditional Council does not have the right or powers to impose such restrictions on Radio Ada and its staff,” it stressed.

At a press conference in Accra Thursday [August 11, 2022], the President of the GJA, Albert Kwabena Dwumfour, further said such action by the traditional leaders had the tendency to endanger the lives of the staff of the radio station.

The GJA President entreated the traditional leaders to use laid down channels for redress, instead of the path they had chosen, saying that barring the three hosts of Radio Ada from wearing the paraphernalia of the radio station and particularly mentioning their names were a threat to their lives and those of their families.

The press conference, held at the International Press Centre, was to state the GJA’s position on the impasse between the Ada traditional leaders and Radio Ada which has dragged since last June.

Present at the event were the General Secretary, the Organising Secretary of the GJA, Dominic Hlordzi; the Public Affairs Officer, Rebecca Ekpe, Kofi Yeboah and the Chairman of the Greater Accra Branch of the GJA, Charles Benoni Okine.

The press conference followed the traditional council’s ban on Ada Radio from providing coverage of the Asafotufiami Festival on August 1, after it had earlier banned the station from covering the launch of the festival held at Treasure Island in Ada on June 30, 2022.

The council took the decision because it alleged that three hosts of the station’s programmes, while on air, used unrefined language on chiefs in the area.

Mr Dwumfour said whatever differences existed between the traditional leaders and the radio station should be resolved through the laid down channels, instead of the use of authority, “which is also against the law”.

“With all due respect, the Ada Traditional Council does not have the right or powers to impose such restrictions on Radio Ada and its staff. In fact, it is an affront to press freedom, as guaranteed in Article 21(1)(a) and (f) of the 1992 Constitution and Article 19 of the Universal Declaration on Human Rights,” the GJA President stressed.

Mr Dwumfour said the GJA’s fact-finding mission had established that people close to the council were worried about the use of “insulting” and “disrespectful” language by programme hosts of Radio Ada on traditional authorities.

The hosts were also cited for mentioning the names of Neneme (kingmakers) without according them their respective titles and also inciting the people to hoot at Neneme and call them names during a recent demonstration.

While the GJA President appreciated the concerns of Neneme, he believed the imposition of restrictions on the radio station and its reporters was unjustifiable.

“The GJA is interested in seeing peace restored between the Ada Traditional Council and Radio Ada,” he stressed.

Giving the sequence of events, Mr Dwumfour noted that since its establishment 24 years ago, Radio Ada had covered the Asafotufiami Festival every year.

However, this year’s event was different because, for the first time in its history, Radio Ada was denied its status at the celebration of the festival.

The blacklisting of the station, he explained, started with the council not inviting Radio Ada to cover the official launch of the festival at Treasure Island in Ada on June 30, 2022.

On July 14, 2022, the management of the station wrote a letter to the Ada Asafotufiami Planning Committee 2022 to draw its attention to what it believed to be the “inadvertent omission to the regular protocol of the planning committee”.

The management, in the morning of August 1, followed up on its letter with a delegation to meet the council to further discuss the matter.

According to officials of the station, the outcome of that meeting was positive.

“However, the council, later on that same August 1, followed up with a letter to the radio station, delivering its decision to place restrictions on Radio Ada,” he explained.

The restrictions, Mr Dwumfour said, were that “Radio Ada will not be allowed to mount a stage at Ada Asafotufiami Park; that Neneme will not grant interviews to journalists from Radio Ada, and that Noah Dameh, Serwah Warri and Amanor Dzeagu who were hosts of programmes and used unrefined language towards Neneme were not to be seen at the park in Radio Ada paraphernalia”.

While commending the council for taking steps to file complaints at the National Media Commission(NMC) against the alleged unprofessional conduct of the radio station, the GJA President wondered why the council violated the rules on complaint settlement of the NMC per the imposition of restrictions on the radio station and its reporters.

He further observed that “since the complaint by the council was still pending and had not been withdrawn, it had violated the NMC complaint settlement rule, as provided in Section 13(2) of the NMC Act, 1993 (Act 449), by constituting itself into a traditional court to punish the radio station and its staff”.

Mr Dwumfour advised the management of Radio Ada and its staff to refrain from using insulting or unacceptable language in the discharge of their duties.

He revealed that the Radio Ada issue had been discussed with the leadership of the Ghana Police Service to provide full protection for the staff of the station to enable them to go about their normal duties.

During an open forum, some media practitioners sought to know what the GJA was doing about the recent attack on Kofi Adoma Nwanwani, the Director of News at Angel Broadcasting Network and Founder of Kofi TV by unknown assailants.

The GJA President, in his response, said the association was already in consultation with the police on the matter to come up with the way forward based on facts of the matter.