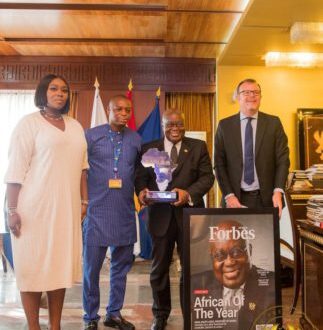 President Akufo-Addo has formally received the “African of the Year Award” from Forbes Africa Magazine.

He was presented with the award on Thursday by the management of the Magazine. The President took to his Twitter page to announce the good news.

President Akufo-Addo has been adjudged the ‘2021 African of the Year’ by Forbes Africa Magazine.

Interacting with JoyNews, the President noted that this award is one won due to the support of the populace and the legislators behind his government.

“This is as a result of my government and not just myself. Also about the population, the Ghanaian people who have made these choices and have been very supportive of the work I do. I am looking upon this prize or commendation as one for Ghana, won for my government,” he said.

In its latest edition which was unveiled on Friday, the magazine explained that “Ghana’s President, has repositioned the country in the global marketplace as one reliant on its own resources and strengths.”

Among those who congratulated Ghana’s President were President of African Development Bank Group, Dr Akinwumi A. Adesina, former President of the Republic of Liberia, Ellen Johnson Sirleaf.

According to Dr Akinwumi A. Adesina, President Akufo-Addo is an embodiment of a remarkable ‘can-do’ African Spirit.

“I would like to warmly congratulate Nana Akufo-Addo, President of the Republic of Ghana, on being named Forbes Africa’s ‘African of the Year.’ This is an excellent and very well-deserved honour and recognition. As a leader, you continue to push the boundaries of what is possible for Ghana and the people of Africa.

You are an embodiment of a remarkable ‘can-do’ African spirit… a spirit of focused determination that seeks to make a difference in the lives of your people and unleash Africa’s true potential. Once again, congratulations and warm felicitations,” he stated.