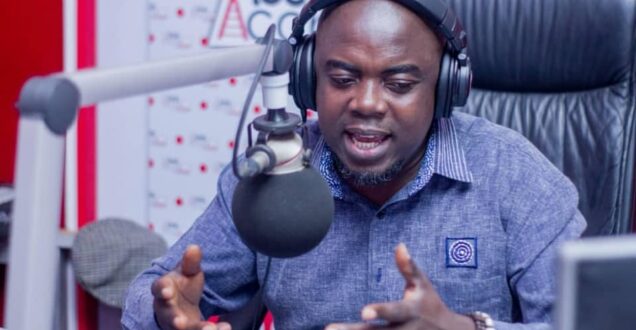 A presenter with Accra FM, Kwabena Bobie Ansah has been reportedly arrested.

According to a producer of his programme, the Citizen Show, Kwabena was picked up by persons purported to be National Security operatives on Thursday night.

It is unclear what occasioned the development which ensued around the premises of the radio station after his political talk show ended at about 10 pm.

“We have no idea about where he has been sent to,” the show’s producer said in a Facebook live stream after the incident.

Another presenter at the media house, Odansini Odilia described the incident in Labone as an ambush.

She explained that on her way to the station to prepare for her show; “I saw one black car drive past. A second car, ash in colour, stopped by me and looked at me suspiciously. The last car is the one we met at the gate. That was when I passers-by about why the cars are moving around in such fashion only to find out that he (Kwabena Bobie Ansah) has been arrested.”

“It wasn’t the right procedure to arrest him. He was not rightfully arrested,” she added.

Sources say the journalist has been sent to the Nima Police Station.

Security officials are yet to publicly comment on the matter.

This brings to three the number of journalists arrested by security officials this year.