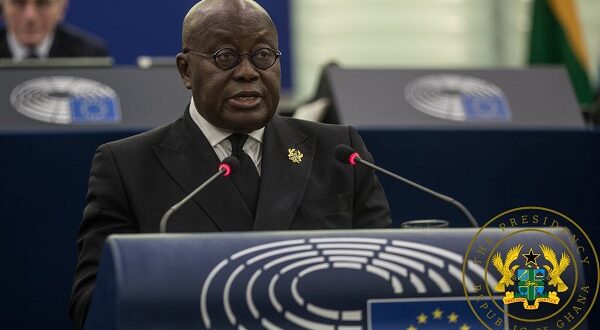 President Nana Addo Dankwa Akufo-Addo has told the European Union (EU) Parliament that the unsavory politics of vaccine nationalism by developed economies in the world has the potential to derail global efforts at containing the COVID-19 pandemic.

He has, therefore, called on the developed world to make COVID-19 vaccines available to all parts of the globe as the surest way of ensuring that the people of the world are safe from the increasing trend of the pandemic.

The President made the call yesterday when he addressed the EU Parliament in Strasbourg, France.

“I am a firm believer in the statement that ‘No one is safe until everyone is safe’. Let us help make vaccines available to all parts of the world, encourage our citizens to take the jab and we will win the fight against COVID-19 faster and together,” he said in an address monitored from Accra.

President Akufo-Addo noted that the prediction about Africa going to be hit dramatically, with its streets littered with dead bodies, when the virus reached the continent because of its relatively weak public health systems had not come to pass.

“We were not given credit for quickly following the science, as recommended, when many leaders in Europe were still fighting ideological battles and seeking to lay blame on the source of the virus, rather than uniting to fight it,” he said.

He added that at every stage, Africans had been dismayed to discover that every attempt was being made to make the COVID-19 too an African disease, adding that the narrative emerged that it was not really that Africans were not dying from the pandemic but that “we had to be covering up the true level of infections”.

With Africa caught up in the “vicious vaccine politics that engulfed the world”, the President expressed gratitude “for the donations of vaccines through platforms such as COVAX, which was good enough to send its first consignment anywhere in the world to Ghana”.

He also expressed worry that till date, less than 10 per cent of Africa had been vaccinated, compared to the EU, for example, which had vaccinated 70 per cent of its population as of August this year.

He noted that with countries on the African continent still not being able to have sufficient access to vaccines in the requisite numbers, Africa, just like the World Health Organisation (WHO), was worried that “the phenomenon of hoarding vaccines will worsen even further, as countries begin to administer booster shots in response to the threat posed by the Omicron variant of the virus”.

President Akufo-Addo, who is also the Chairman of the Economic Community of West African States (ECOWAS), reiterated the strong opposition of the regional bloc to the decision taken by countries, including those in the EU, to single out African countries for the imposition of travel bans.

He explained that the Omicron variant had been discovered in over 40 countries, with reports indicating that the variant was present in The Netherlands way before it was discovered in South Africa.

“The world should be grateful to the South African scientists whose knowledge and expertise in genomic sequencing enabled them to identify the new variant. Plaudits, not condemnation of their people, should have been their portion.

“Why is there not a travel ban imposed on The Netherlands but against South Africa, one may ask?” the President asked.

While acknowledging the importance of Africa building up its health delivery systems to enable the continent to withstand future crises, the President told the EU Parliament that the Ghana Government had launched Agenda 111, which sought to build hospitals in each district, where there was none, so that ordinary people could have ready access to medical care.

In addition to that, he said, Ghana had decided to set up a National Vaccine Institute, which would supervise the domestic production of vaccines across several sectors, including anti-COVID-19 ones, led by the private sector and the business community.

“We need to be self-reliant and shed the image of beggars living on charity, aid and handouts, and make better and more intelligent use of our abundant natural resources in order to pull ourselves out of poverty to prosperity.

“These are not new aspirations; they have simply been reinforced by the lessons of the pandemic,” President Akufo-Addo added.