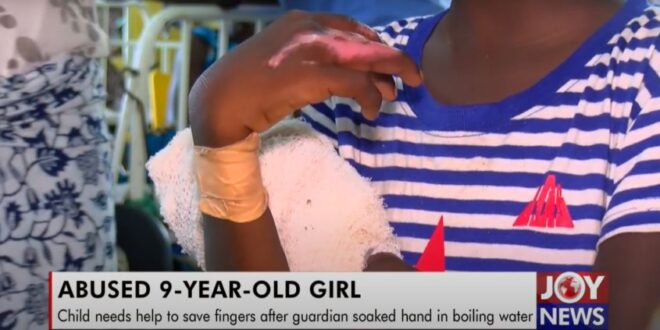 A nine-year-old girl has given a chilling account of how her guardian held her hand into boiling water as punishment for taking ¢2 to buy food without asking.

Ellen Serwaa, a teacher, is accused of managing the injury at her house in the Ahafo regional town of Goaso for days until the child’s hand deteriorated.

Doctors at the Bibiani Government Hospital say the girl has a 20 per cent chance of regaining her finger function.

Her family is seeking financial help to save her hand.

Looking weak, frail, and in pain, Stephanie spots a left hand in bandages and open wounds on two fingers on her right hand.

The victim was named after the husband of her alleged abuser about a year ago due to his benevolence.

The Pentecost Church Elder, Stephen Nketiah, requested to bring her over to stay with his family.

Once in the care of the man of God, the child speaks of persistent caning and starvation until late last month when she took ¢2 to buy food.

With anxiety in her eyes, she told Luv FM how her step-mum punished her.

“She boiled the water in a rice cooker, and she took me into a room and tied me to a chair. Then, she asked her daughter to hold the hot water whilst she held my hand into the hot water.

“She held my hand in the water until it developed blisters. Then, she used a razor blade to cut into the blisters,” she painfully recounted.

Her biological mother, Margaret Fokuo, is shocked at the development.

“When I saw her, she had her hand wrapped in cloth. I asked what was wrong, and she was crying. I was shocked when she uncovered the wound. I questioned why she [the alleged abuser] did this to my daughter, and she knelt crying.

“I am appealing to people to help me financially restore my daughter’s hand,” she pleaded.

Dr Deborah Mensah at the Bibiani District Hospital told Luv News that the girl needs urgent surgery to increase her chances of saving her hand.

“The burns are very severe. Already, all the fingers and the palm are edematous. Our primary concern is dealing with the complications from the burns since the child was not brought on time.

“The child is already unable to extend the fingers. So we need to separate the fingers. It’s unlikely that the hand was in the water for a short while; if that were the case, we’d only expect maybe first degree burns, which would result in blisters and would usually heal quite quickly,” she explained.

At the house where the abuse took place at Goaso, we met Stephen Nketiah, the suspect’s husband.

He told our news team that the suspect, a nursing mother, is sick and has since regretted her action.

Ellen Serwaa was arrested and granted bail by a Goaso Circuit court.

“As the suspect was released on bail by the Court, and she is to reappear in court on May 31, we’re also speeding up with our investigations to get the docket ready by then so that we’d properly prosecute her.”