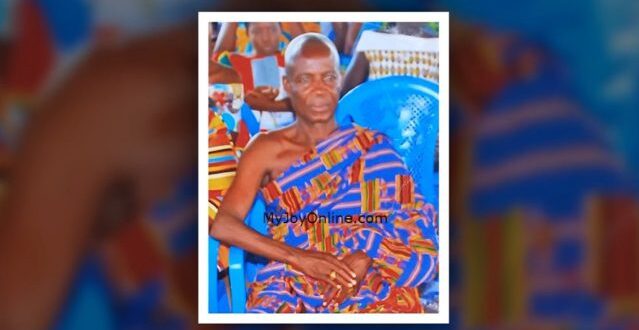 The family of the 76-year-old chief in the Ashanti Region, who allegedly died by suicide, are fighting claims he killed himself after losing some cocoa farmers’ money worth GHS120,000 to betting.

In an interview with JoyNews, family members of Gyaasehene of Dawereso, Nana Opuni Kwagyan, known in private life as Emmanuel Opuni, said his suicide might have been influenced by the activities of fraudsters.

The Chief of Dawereso, Okogyeatuo Amoako Agyemang, told JoyNews’ Erastus Asare Donkor that the deceased had given his vehicle to some persons who promised to sell it for him,

He explained that these men had promised to sell the car, settle the chief’s debt and bring him his balance.

However, after receiving the car, its keys and the papers, the men absconded.

Nana Okogyeatuo believes that incident may have been haunting the deceased.

The news of the chief committing suicide went viral about two weeks into January 2022.

Multiple outlets had reported that the deceased shot himself in his bedroom, after asking his son to prepare him some porridge for breakfast.

But his family are rubbishing reports he died by suicide due to his loss of a bet.

His 100-year-old mother, Ama Anane told Erastus Asare Donkor that not only are the reports untrue, but the deceased was not interested in any forms of betting.

She said that her son was calm, stayed away from trouble, and did not spend money belonging to others.

The deceased before his retirement and death had been a lecturer at the Akrokeri Training College, and the Kumasi Technical Institute.

He was also a Deputy Director of Education in the Bosome Freho District.